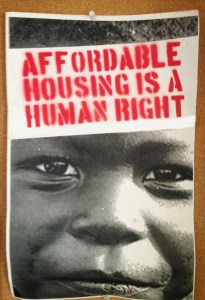 Who doesn’t support the concept of “Affordable Housing?”  As rents climb to ever-ascending heights and ever more people are pushed from their housing, ‘affordable housing’ is like motherhood and apple pie for activists and elected officials alike.

But do affordable housing projects discriminate against people with disabilities who are low income or have SSI as their only income?  Today, Lynda Carson lays out the harsh reality in conversation with Eddie Ytuarte.

They will be joined by Christine Webster, a stroke survivor and tenant organizer from Healdsburg, California.  Mass evictions of 21 Latino tenants by a racist property group recently spurred calls for rent control in that city. 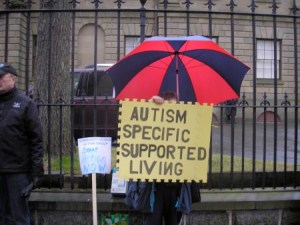 Lynda Carson frequently observes and critiques the non-profit housing industry in the East Bay area of California using the moniker Tenants Rule.  She believes “affordable” housing is often a misnomer because its income standards are too high for people with disabilities who receive SSI and other very low income people.  Aside from raising questions about who “affordable” housing actually houses, Carson has written about the dwindling of Section 8 housing and local elected officials who love to use their votes to enrich big-time housing developers.

Lynda Carson writes for Street Spirit, the S.F. Bay View, East Bay Express, Beyond Chron. and many others.   She can be reached at tenantsrule@yahoo.com

Christine Webster is an activist, tenant and Section 8 user in Healdsburg, California.