The Canary in the Coal Mine

How Gallaudet University’s deaf students toppled a president with the aid of social media years before the current Occupy Movement began.

Originally published on 11.3.2011 at the Justice For All Blog from the American Association of People with Disabilities.

Just as I’m flying to California State University Northridge to present at their Deaf College Student Leadership Conference, I was reading a copy of Newsweek. There was a story on the infectious appeal of the #Occupy Wall Street movement. One particular quote stood out to me:

“In 2008 vast new numbers of Americans transformed the political process through social media and small-donor fundraising, electing a rank outsider, Obama, who challenged the natural heirs to the old system, the Clintons. The next year Iranians, empowered by the same technologies, called their own leaders’ electoral bluff and nearly changed the world. This year the very same empowerment gave us the Arab Spring.” – Andrew Sullivan, October 31 2011

The narrative goes on to link the meteoric trajectory of social media’s increasing presence in our daily lives and its impact upon global politics and – yes – corporate responsibilities. The “99%,” as they unveiled themselves on Wall Street more than six weeks ago, spoke out against growing income inequality and argued that financial institutions played a large role in it. The #Occupy Wall Street movement quickly expanded exponentially, garnering solid support through public opinion, even seeing #Occupy camps being set up in other cities. Soon, the #Occupy movement had hit the international level. I was starting to become accustomed to seeing the pictures of frustrated people getting their message out. I was inspired when these same pictures from places such as India, Italy, Chile, Russia, the United Kingdom, Algeria, and Spain appeared. 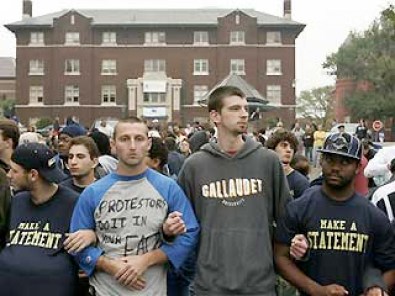 Some people criticized #Occupy as disorganized and lacking focus.  But other pundits took to the pages of newspapers, magazines, and blogs to defend the #Occupy movement, calling it “not a protest but a true movement.” Regardless of how one defines #Occupy it’s clear to me that it could not have been possible without the power of social media.

We now see where the narrative has led us to, but the untold story is how the narrative didn’t begin at Obama’s 2008 campaign. The revolution of the social media hit the people with disabilities community, with their unique needs and perspectives, and changed their lives before the 2008 campaign. I’m telling this story not to have the disability community take credit as the originators but to give evidence of and solidify our unique status as “the canaries in the mine.”

In the olden days, when there was no technology to detect dangerous and deadly carbon monoxide in the mine, people used to bring canaries – bright, yellow, and singing – into the dark pits of the mines. Their purpose was to keep the miners alive. Because the canary was such a small, fragile bird, the carbon monoxide severely damaged the canary’s lungs long before it could have detectable effect on the miners. As soon as the canary stopped singing and dropped dead, the miners knew it was time to get out of the mine. Through this strategy, hundreds of human lives were saved.

The disability community – especially the deaf community, where I hail from – is likewise smaller, more fragile, and the “first to be impacted” by nearly anything that happens in the real world.

At generally the same time as the hearing world, the deaf community discovered blogging and vlogging (video-blogging). In May 2006, as the members of Gallaudet University rose up in a protest against the Board of Trustees’ decision to select a controversial candidate as the next President, the impact revebrated through the circles of deaf social media with a sonic boom. The administration presented their side of the story, which the protesters disputed and learned through the hard way that the mainstream media wasn’t always so fair in their coverage. The frustration of having one same article published in hundreds of newspapers through the Associated Press intensified the protesters’ dissent and added more to their argument that the perception and explantation of the protest was distorted and dishonest by the administration. We were merely students, staff, faculty, and alumni up against media professionals!! Such was the frustration we faced, but I’ll never forget this one game-changing line from the University’s offical public-relations spokesperson, defending the administration’s public relations tactic of distortion and giving misleading explanation of the protest’s real issues:

“Actually, the protesters have been very effective in getting their messages out through blogs and vlogs.”

That was true. Very true. Game-changing true. Ever since before the protest had happened, the deaf community was watching the protest closely and with deep interest through the internet. There was a blog set up that tracked the candidates for the Gallaudet University Presidential Search. Vlogs were made, hot discussions were had, and comments numbered well into the thousands. The anticipation was ripe when the announcement was made in May 2006 and when the information was disseminated, the blogosphere exploded in discussion and activism. There were a few blogs that ultimately became a kind of news channel for the deaf community, rapidly updating nearly daily with new information and developments. This gave us opportunity to present our side and our story, absolutely unfiltered and unmanipulated by the mainstream media.

At the time, we had only one media strategy – tell the truth. Tell the truth. Try to get the mainstream media to explain the truth. We didn’t have any other strategy than that but looking back, we utilized many tools that were enormously effective through the use of social media. We were able to galvanize and organize the community in a mass, to control and continue pushing our message out, and stick a powerful thumb in the side of the big guys.

The underdogs won in October 2006, when the Gallaudet Board of Trustees announced that the president-designate’s appointment would be rescinded. We cheered our victory! And in the aftermath, we were proud that our internet outreach had been so powerful to expand the tent city on Gallaudet University’s front lawn to a series of tent cities across the nation and internationally.

In 2007, when Dr. Robert Davila became the first person of color to serve as Gallaudet University’s president, the moment had great signifiance to many communities. As he took the podium to give his acceptance speech to the community, the first thing he said was “I’m home.” The deaf community cheered once again! That same year, then-Senator Barack Obama surveyed the landscape and decided that the moment was ripe for him to run for the President of the United States.

What the deaf community went through in these turburlent times of 2006-2007 ultimately gave us a small prediction of what would happen in the larger American and even international society. First, the impact of social media and the use of internet campaigns completely changed the way we organized ourselves for social and political causes. Secondly, people of color are now becoming more and more in our society. We are no longer survivors of outdated perceptions, inspiring in their climb towards the top. They are now university presidents, Commander in Chief, even overthrowing regimes.

Wherever you live, whatever your goals, whichever candidate you support, you are living in a world where social media – as mastered by the Deaf community—is a source of power that can’t be ignored.  We tested the atmosphere and carved out a space for great work. What we have done will have a profound impact on movements that follow.

Watch and take your cues from us.

This entry was posted in Uncategorized. Bookmark the permalink.