Sheltered Workshops or Sweatshops for the Disabled?

Sign a petition demanding fair wages for people with disabilities!

170,000 signatures on petitions delivered to Goodwill Headquarters around the country.

Four hundred thousand people with disabilities in the USA work for substandard wages, some of them for as little as 3¢ an hour.   We discuss what are known as “sheltered workshops,” segregated workplaces for workers with various disabilities, and jobs that pay less than minimum wage. 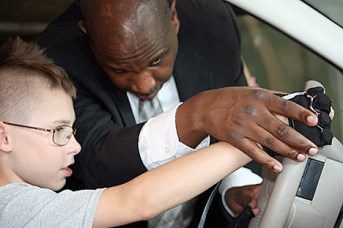 Anil Lewis works with a student with disabilities in an NFB program.

Goodwill is an important part of our clothing distribution system, not only in the US, but internationally.  And, in the back rooms of Goodwill people with disabilities sort the hangers, hang the clothes and generally change your bags of cast offs into something that can be resold.   Goodwill is a notorious sub-standard wage employer. 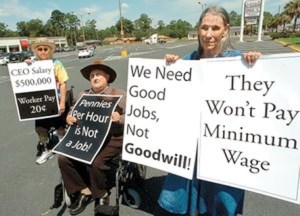 Our guest is an expert on sheltered workshops, Mr. Anil Lewis, the director of advocacy and policy for the National Federation of the Blind.  The NFB has been doing a campaign to repeal Section 14 C of the fair labor standards act of 1938 because it is Section 14 C which allows employers to legally pay these sub-minimum wages.  Learn more here.

Goodwill Industries says these people can’t do productive work and that they are training them for better jobs.  Anil Lewis helps us get to the bottom of this claim.