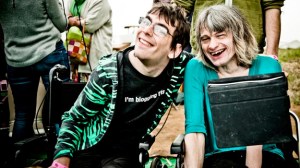 The British Paraorchestra is the world’s first professional ensemble for disabled musicians.  Founded in 2012, this 26 piece orchestra aspires to the highest quality while accommodating the needs of its eclectic musicians.

Britain’s Channel 4 made a film about the music, the musicians and the orchestra’s beginnings.   This orchestra is the first to validate and work with musicians whose instrument is principally electronic.  That, alone, is opening minds in the music community.

We play clips from this film, “The Great British Paraorchestra” and talk about this new entry onto the world stage. 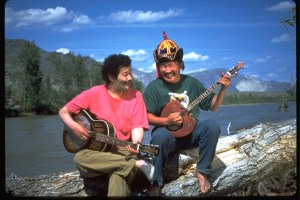 We also feature the film Genghis Blues which tells the story of blind blues musician Paul Pena as he travels to Tuva to win a national throat-singing competition.   Tuva is an isolated high-altitude country in Southern Siberia near Mongolia.

This Oscar-nominated film portrays Paul Pena directly, without down-playing or sugar-coating his disability.  The opening sequence of Paul’s cane as he walks down a sidewalk is, in itself, worth the price of the ticket.

Disabled people living and traveling around the world– in this Pushing Limit’s program.

Call to become a member of KPFA.

For a $60 pledge, we’ll send you a copy of either of these films.  We’ll also have copies of The Bird Escapes, a retrospective of poetry by working class feminist poet, Martha Courtot and the Pushing Limits Disability History Special to sweeten the fund drive pot.  The program is hosted by Shelley Berman and Adrienne Lauby.

Many thanks to the distributors and producers of these films for their donated copies for KPFA’s fund drive: Claire Whalley producer for What Larks Productions for The Great Britain Paraorchestra & Keli Ballinger, creative director of Wadi Rum Films and director Roko Belic for Genghis Blues.