Traveling with a disability in 2014: the good the bad and the headaches 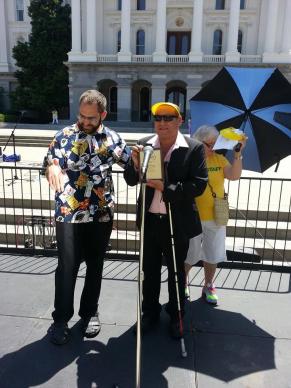 In May the Independent Living Resource Center in Santa Barbara organized a trip to Disability Capitol Action Day in Sacramento with a group of 8 consumers, (2 in power wheelchairs.) While two consumers flew due to medical needs, the rest of us (6 disability community members plus two staff members), took the train and got there at midnight the night of the event.

Before the trip, we called Yellow Cab and were told that they had accessible cabs and we had to call the day before to reserve them. We did that and they told us they would be at the train station at midnight. The next night we called from the train to say we would be a half hour late and was told that they had no one to drive the accessible cabs and they were not coming to pick us up. So the two ambulatory members of our group and the two power wheelchairs users had to walk and roll 17 blocks to our hotel at 1:00 AM. Four of us who could not make the walk took a regular cab to meet the others at our hotel. The hotel, which was said to be wheelchair accessible by our booking agent with Amtrak, was not. We could get in the door but not the bathrooms.

The next day we had a reservation with Yellow Cab made two days previously to go to capital at 8:30 am. The dispatcher called saying the cabs were overbooked and they would be there ASAP. We had to wait an hour although we had made a reservation 48 hours before. 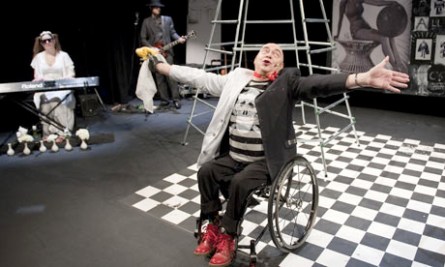 On the way home we transferred from the Amtrak train to a Thruway coach in Emeryville. This bus was contracted by Amtrak through a coach company and was accessible but it did not have the wheelchair seating set up yet. Oh they had a lift, but the seats covering the wheelchair spaces still had the bolted down factory setting. Fortunately the Manager at the train station had the required tools. It took the driver, an Amtrak station worker and one of our group an hour to unbolt the chairs and remove the pins so the seats could be pushed back to operate the lift. Worse yet, the driver was not notified he had wheelchair passengers even though we checked in early at every point with Amtrak during the trip and always emphasized the wheelchair access needs.

Given the situation, the driver and all involved did a stellar job getting us on the road. We all had a very anxious hour wondering if we were going to be left behind. One of our members volunteered to station her power chair in front of the bus if it tried to leave without us. The group was ready take action but, not only did we get home safely, we arrived back home in Santa Barbara a few minutes early. Our trip only served to illustrate the whole purpose of Disability Capitol Action Day. If all access were smooth, we wouldn’t need to come together in the largest assemblage of persons with disabilities in the state, to advocate for our access rights.

*Jacob Lesner-Buxton is a former member of Pushing Limits.  We welcome his trenchant report and thank both him and Kathleen Riel for permission to reprint it.