“Not Dead Yet” Board of Directors

The “Not Dead Yet” Board of Directors not only has many members who live with a disability but has many seasoned disability activists among its members.  Its flaw is in having only two easily identified people of color on the board.  Scroll down for biographies and pictures. 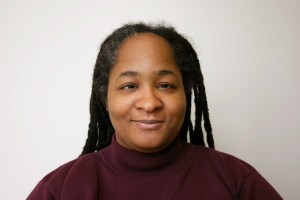 Anita Cameron hails from Chicago, Illinois. She holds a degree in Biology from University of Illinois at Chicago Circle and a degree in Computer Information Systems from Community College of Denver.

In 1986, Anita joined ADAPT, a national, grassroots disability rights organization. In 27 years of involvement, she has risen to a position of national leadership. She was invited to the White House on two occasions, has met three sitting U.S. Presidents and two Vice-Presidents, helped to organize a national March, and was published in a book by the late award-winning writer and historian, Howard Zinn.

In 2004, while in Washington, DC, Anita trained to become a CERT (Community Emergency Response Team) member. In 2008, she helped to form the first CERT class consisting of people with disabilities in Rochester, New York. After joining Denver CERT in 2011, Anita became the first visually impaired CERT instructor for the State of Colorado in 2012, and in 2013, became a CERT Program Manager for the State. She has assisted in numerous exercises and real-world incidents with Denver CERT, including serving as a radio communications operator during the Colorado Flood of 2013. 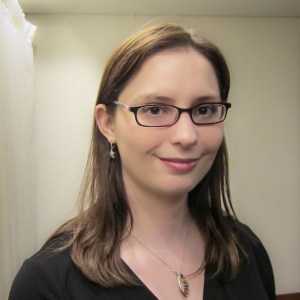 Samantha Crane is Director of Public Policy at the national office of Autistic Self Advocacy Network (ASAN). Samantha previously served as staff attorney at the Bazelon Center of Mental Health Law, focusing on enforcing the right to community integration as established by the Supreme Court in Olmstead v. L.C., and as an associate at the litigation firm Quinn Emanuel Urquhart, & Sullivan, L.L.P., where she focused on patent and securities litigation. From 2009 to 2010, Samantha served as law clerk to the Honorable Judge William H. Yohn at the U.S. District Court for the Eastern District of Virginia.
She graduated magna cum laude in June 2009 from Harvard Law School, where she was Senior Content Editor for the Journal of Law and Gender.. During law school she interned at the Civil Rights Division of the U.S. Department of Justice, where she worked in the Disability Rights Section. She also interned at the American Bar Association’s Commission on Mental and Physical Disability, the Disability Law Center of Massachusetts and Harvard Law School’s clinical programs in special education and in disability and estate planning.  Samantha holds a B.A. from Swarthmore College, with high honors, in Psychology.

Horacio Esparza
Horacio Esparza has been the Executive Director of Progress Center for Independent Living since 2008, after serving in other positions there since 1999. He also produces and hosts the first radio show in the country dedicated to disability rights, culture and the independent living philosophy. The radio show “Vida Independiente” (“Independent Living”) is transmitted live every Saturday morning from 9am to noon on WNTD 950 AM and on streaming live audio around the world at www.radiovidaindependiente.com; the first hour is in English followed by two hours in Spanish. 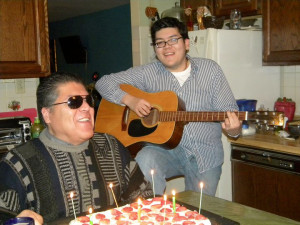 Horacio Esparza is a highly sought speaker on the subject of people with disabilities at the local, national and international level. Recent speaking engagements include presentations at annual conferences at the ISPALMER held in Bayomon, Puerto Rico, the National Council on Independent Living in Washington, D.C., and Fiesta Educativa in California.

Horacio Esparza was born in the city of Zacatecas, México, studied at the school for the blind in the City of Guadalajara, Jalisco and went on to earn his Bachelor’s degree in Hispanic-American Literature from the University of Wisconsin-Whitewater. He also received a degree in philosophy from the Autonomous University of Guadalajara, Jalisco. Horacio is a member of the Illinois Statewide Hispanic Council and an active participant in the Immigrants with Disabilities Rights Project. He is a recipient of the 2006 William F. Lynch Award from the Guild for the Blind.

Horacio is a long time member of Not Dead Yet, participating in a Chicago protest at a Final Exit Network conference, and representing NDY in national and local Spanish media coverage of the assisted suicide issue. 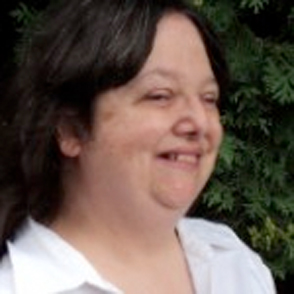 Amy E. Hasbrouck has been a disability rights activist for more than 30 years. Ms. Hasbrouck’s activism combines her personal experience with congenital and acquired disability with a cross-oppression analysis gained through involvement in the women’s rights, anti-war, LGBT, and other social justice movements. She worked in architectural access and the independent living movement before graduating from Northeastern University School of Law in 1997. Her subsequent legal work focused on health and mental health law and implementation of the Americans with Disabilities Act. Ms. Hasbrouck has focused her writing and research skills on abuse of children and adults with disabilities, producing a groundbreaking report on prosecution and sentencing of parents who kill their disabled children in 1997. This study led to her involvement with Not Dead Yet, the disability rights-based opposition to assisted suicide, euthanasia, and other “end-of-life” practices that discriminate against people with disabilities which continues to this day. Ms. Hasbrouck is currently a board member of Not Dead Yet in the U.S., and Director of Toujours Vivant-Not Dead Yet, a project of the Council of Canadians with Disabilities to expand the reach of CCD’s ending of life ethics committee. She lives with her husband in Québec, Canada. 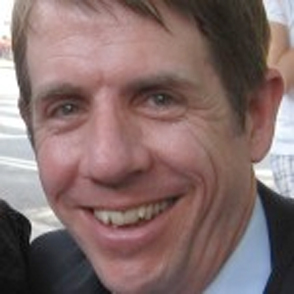 Kevin Irvine is a disability rights advocate in Chicago with a particular interest and expertise in public & private transportation issues. From 1998 – 2006, Kevin worked at Equip for Equality (Illinois’ Protection & Advocacy system) as a Senior Advocate with dual responsibilities as EFE’s Transportation Advocate and as a member of EFE’s Training Institute. Currently, Kevin serves as a Director on the Boards of the Chicago Transit Authority and Access Living of Metropolitan Chicago.

Kevin’s commitment to the disability-rights movement developed from his life experiences as a person with multiple disabilities – He was born with Hemophilia B, a bleeding disorder, has lived with HIV/AIDS and Hepatitis C for over 30 years, and has had two total left knee replacements. His wife was also born with a disability and uses a wheelchair. In 2006, Kevin left EFE to serve as an at-home parent shortly after adopting their daughter, who has significant physical disabilities, including Apert Syndrome. As a volunteer, Kevin has organized and been involved with many disability groups, including Chicago ADAPT, Not Dead Yet, Disability Rights Action Coalition for Housing, ACT UP (AIDS Coalition To Unleash Power) and Chicago’s Annual Disability Pride Parade. 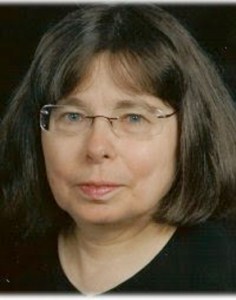 For nearly three decades, Mary Johnson covered the U.S. disability rights movement as editor of The Disability Rag and Ragged Edge magazine, reporting on the fight against physician-assisted suicide, including Not Dead Yet’s actions against Jack Kevorkian, Peter Singer and Clint Eastwood’s Million Dollar Baby. Her articles about disability rights have appeared in The New York Times, The Baltimore Sun, USA Today, the Village Voice, The Nation, Columbia Journalism Review and other publications. She is the author of the book “Make Them Go Away: Clint Eastwood, Christopher Reeve and The Case Against Disability Rights.” 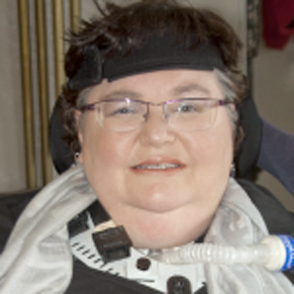 Carrie Ann Lucas is the founder and executive director of the Center for Rights of Parents with Disabilities in Windsor, Colorado. Ms. Lucas is an attorney who specializes in representing parents with disabilities.  Ms. Lucas consults with attorneys around the nation regarding issues affecting parents with disabilities.  She is a former Petra Foundation Fellow and Equal Justice Works Fellow. Ms. Lucas has spent over fifteen years working for disability rights organizations, and was lead plaintiff in an epic 7-and-a-half-year suit against Kmart that resulted in the largest and most far-reaching accessibility class action settlement in history.  Ms. Lucas is a power wheelchair and ventilator user due to a neuromuscular disease.  She is also an advocate for children with disabilities.  She has adopted four older children, all of whom have multiple disabilities – Heather, Asiza, Adrianne, and Anthony. 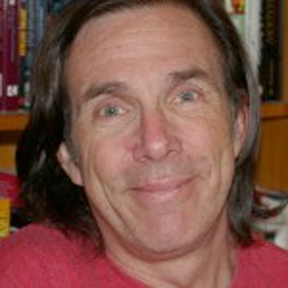 Bill Peace earned a PhD in anthropology with distinction from Columbia University in 1992. His research interests include the history of anthropology, body art and modification, bioethics, and disability studies. He has published articles in journals such as the American Anthropologist, Journal of Anthropological Research, Counter Punch, Ragged Edge and the Hastings Center Report. He also maintains a blog badcripple.blogspot.com. 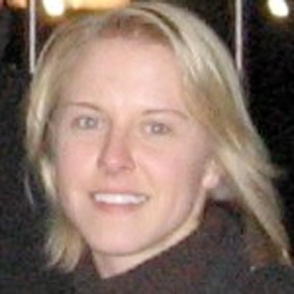 Anne Sommers is the Director of Legislative Affairs and Outreach at the National Council on Disability (NCD), an independent federal agency in Washington, DC. Prior to her time at NCD, Anne served as Policy Counsel at the American Association of People with Disabilities (AAPD). Anne graduated from the William and Mary School of Law. Prior to pursuing her law degree, Anne worked in marketing and copywriting in the health insurance industry, and prior to that, as a free-lance journalist for the Richmond Times-Dispatch. Anne graduated summa cum laude and received her Bachelor’s of Science degree from Virginia Tech University, where she was the Opinions Editor of the university’s award-winning student newspaper. Anne’s co-authored op-eds have been featured in the Washington Post, the Washington Examiner , and Newsday , and a paper she authored regarding wrongful life litigation earned her the distinction of Benjamin Rush Health Law Scholar in 2005. Her interests include health policy, bioethics, and powerlifting. 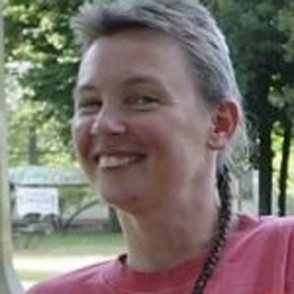 Robin Stephens has been part of the disability rights movement for over 30 years and even before that, as a shy child, she did her part. She has been an activist and advocate in a variety of roles including director of a teen program, manager of an independent living center, research policy analyst, in the streets as a protester and as a lawyer. She was involved in the first Not Dead Yet action and is presently Secretary of the Board. 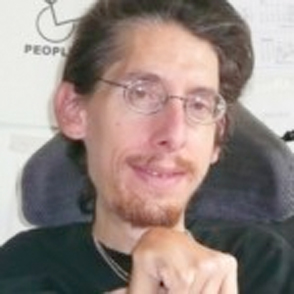 Mike joined Not Dead Yet at its inception in 1996. He had been on the staff of the Capital District Center for Independence in Albany, New York, and later was on the Board of Directors. He has written op-ed columns for his local newspaper, the Times Union, and remains a tireless advocate for the rights of people with disabilities. 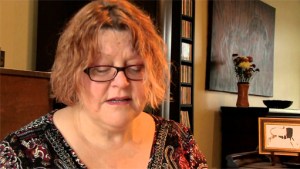 Rhonda Wiebe has actively raised concerns about people with disabilities and their interactions with health care providers for more than two decades. Her research with the Manitoba League of Persons with Disabilities resulted in the publication of Our Last Rights: People with Disabilities and Do Not Resuscitate Orders and the Will to Live Workbook, an interactive tool for people with disabilities, support networks and physicians. Her research with the Vulnerable Persons New Emerging Team (Faculty of Medicine, University of Manitoba) investigated ethical frameworks for healthcare decision-making for people with disabilities; key to this work were publications and presentations on the perceptions medical students hold about living with disability. Rhonda is currently a policy analyst with the Disabilities Issues Office of the provincial government of Manitoba. She is co-chair of the ending of life ethics committee for the Council of Canadians with Disabilities (CCD), and serves on the boards of Not Dead Yet, Toujour-Vivant Not Dead Yet Canada and the Euthanasia Prevention Coalition. What is most relevant to her work is the perspectives she has gained as a person who has lived with significant but invisible disabilities since the age of thirteen.